Lawrence Nash was born in Watford, England and now lives and works in Bristol. He studied fine art in Watford, Wimbledon, Cheltenham and Birmingham, attaining a BA first class honours degree in fine art (sculpture) and an MA in fine art. He has exhibited widely across the UK including the Royal Academy, London, The RWA, Bristol, The Axiom Art Centre, Cheltenham, The Victoria Art Gallery, Bath and the Walsall Museum and Art Gallery.

He has curated exhibitions in Cheltenham and Bristol and has been a judge for a number of exhibitions.

Lawrence's work borrows from minimalism, whereby multifaceted notions are condensed, anything unnecessary eliminated. He is both tenacious in his enquiry and passionate in his beliefs, and is interested in psychology and philosophy and how, through visual media ideas take form.

From early work using artificial lights which denied the viewer the visual experience offered, through the disorientation of using computers feeding back errors, through gestural mark making subverting and transcending the elevated claims of abstract expressionism, to the current work of line drawings that are a call to quiet and reflection, Lawrence continues to question and modulate his work.

While believing it futile to quote direct influences, he does, however, site the seven years of practicing Ki Aikido as one of the most significant toward his work. Rather than a direct stimulus, Ki Aikido has generated an ‘attitude of mind' toward the work - a way of approaching the practice of making. 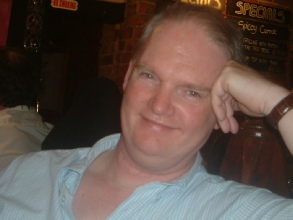